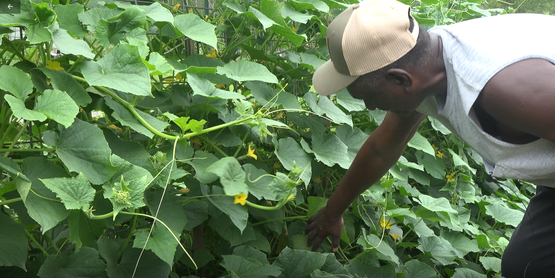 Linwood Ford of Ford Farms has come a long way from his early gardening adventures in the early 1990’s. He has progressed from tobacco to micro greens, and has done it all by downsizing from 22 acres of tillable soil to an acre and a half sized plot of land next to his home in Savona.

He recently sold the produce stand on that leased land, took down the 50-foot high tunnel greenhouse, and started gardening in his own back yard. “There’s a lot going on in a small area,” he says. “I get just as much food here as I got on that 15 acre plot.”

He says one of the secrets to using a small space is “we grow stuff vertically as much as we can.”This summer his high tunnel house had 52 cucumber plants growing out of two rain gutters that spanned just the length of about six feet. Those cucumbers ripened from the ground up. This fall he will be planting another 100 cucumber plants in the greenhouse along with 100 out in the open field. He pointed out that he doesn’t get mold and snails on these vertical plants and they are more tolerant to problems because the air can move through them.

Linwood also repurposes the same space. “I get two crops out of my soil.” Early in the season he plants a row each of broccoli and cauliflower along with nine rows of peas. He says the peas put nitrogen and potassium back into the soil.

The high tunnel greenhouse can extend the growing season, but Linwood felt like it was a waste. “What I learned to do inside the tunnel down there, I can do outside here with row cover.” The row cover is a cloth fabric draped over wires to protect the young plants from insects and disease and to keep them warm. But it requires more work. Because every time the temperature reaches 50 or 60 degrees, the plants need to be uncovered, and then covered back up as the temperature drops.

Linwood credits his success to a whole lot of experimenting. As he walks through his garden he can name every plant and many of them are a “new kind I am trying out.” His latest experiment was in his raised bed garden where he was growing six different types of tomatoes in one space. “They tell you ‘don’t do it,’” he says, “But you can’t tell me something without me trying it for myself. They are companion plants. If there’s any problems, they’ll help each other out.”

He tends his plants as if they were his children. He noticed that there was a pollination issue this year, so he bought 5,000 leaf cutter bees. “Excuse the weeds,” he says, “But I’m feeding my bees until the flowers come on.”

He also comes up with natural ways to manage fungus like raising jalapeno peppers and making his own spray from the fruit. He tries to grow heirloom (or old fashioned) types of plants that produce plenty of fruit. Linwood says heirloom plants have not been modified by man, so they grow stronger, have better disease resistance and are tastier. “The secret is a healthy plant – bugs don’t like a nice green plant. Something under stress they’ll bite.”

This fall Ford Farms will be growing cucumbers, spaghetti squash, zucchini, and pumpkins. Linwood says his honeynut squash are “small baby butternuts that are so sweet they will make your teeth hurt.” He works his garden right up until the ground freezes. Then he starts back up by the end of February. “Winter crops taste better than the summer crops. They’re sweeter,” he adds.

Linwood sells his produce to the Corning Farmers Market which operates in Riverfront Centennial Park every Thursday. Other Steuben County Farmers Markets can be found in Bath on Wednesdays, in Hornell on Thursdays, and Painted Post on Saturdays.

Persistence is what has gotten Linwood where he is today. He sold produce out of his small home garden back in 1991 and tried to find someone that would rent him some land. When he finally found some, it was in the flood plain and his first year got flooded out. The next year he had 20,000 tomato plants with a problem. He called Cornell Cooperative Extension and the agriculture agent gave him an application to help the plants. “Then things started to get better,” he said. “ Cornell is a blessing if farmers will use them.”

When he got his high tunnel through a grant, his first plantings all died. But he visited other greenhouses to learn how to manage the heat and water and by the third year had a good crop. He continued to learn by working with other farmers and by experimentation.

Linwood just started growing the micro greens this year. Microgreens are a 14-day crop that are popular at restaurants and college towns. Linwood sells his to the Village Tavern in Hammondsport. It is an expensive project because the growing area needs to be climate controlled and very clean. He says it requires a lot of babysitting since the plants need to be rotated and fed three times a day. He has created a space in a trailer that is maintained at 70 degrees at all times.

Linwood enjoys monitoring his garden plants. He stops in the middle of the garden and says, “Listen…” After a few moments of silence, he adds, “How much closer to Heaven can I get? 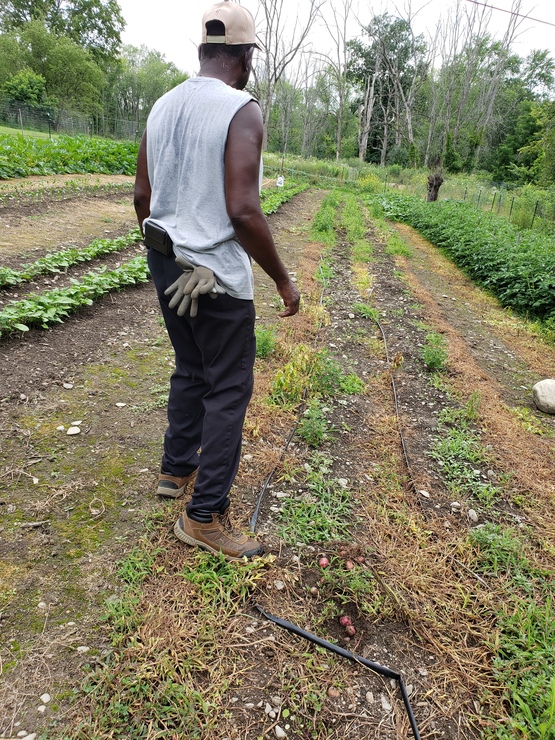 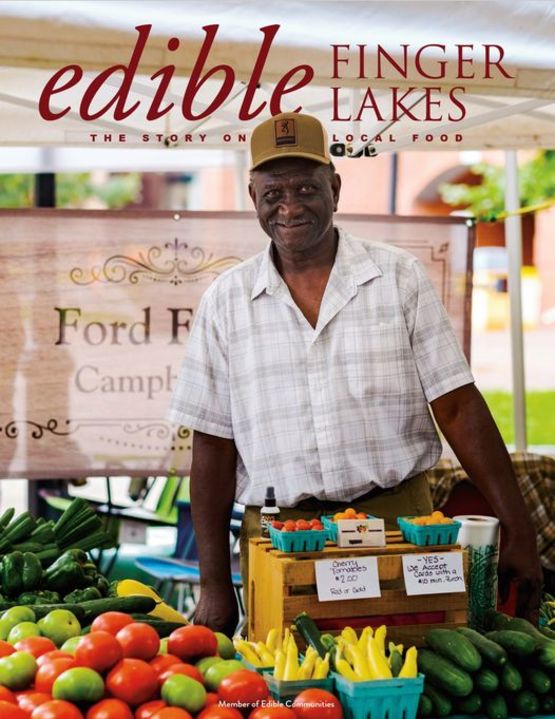 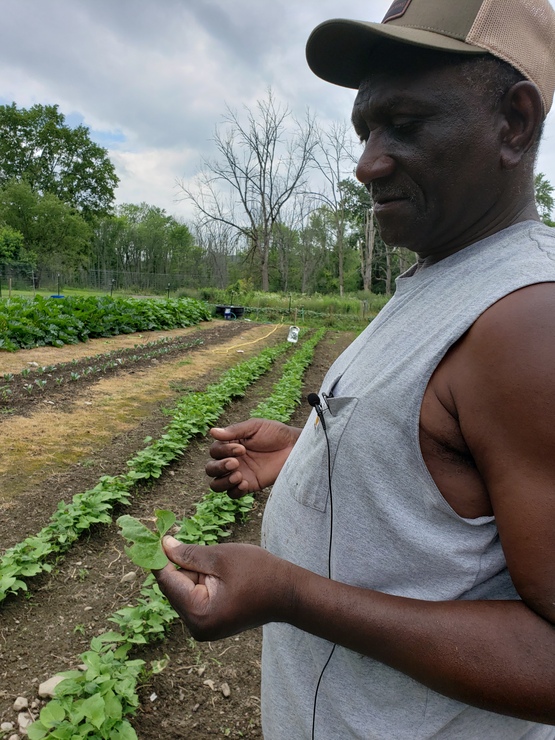 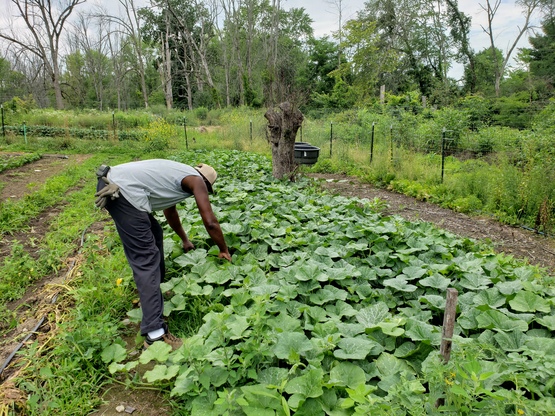