Bath Courthouse from a vintage postcard

This is a story of a practical idea, how it came into being, and how it comes to affect every one of us today.

This idea had its beginning in the mind of a retired college president, Dr. Seaman A. Knapp from Essex County, New York, who had spent his life teaching and preaching better farming methods at institutions such as Iowa State College. His idea involved the teaching of agriculture through demonstrations on the farm. He ot the chance to put the idea into practice in the southern United States to help control the cotton boll weevil. The demonstration idea caught on and spread in the cotton counties of Texas where the first county agent, W.C. Stallings, began work in 1906.

The idea came to New York State in 1910. The Broome County Chamber (Binghamton, NY) and the Lackawanna Railroad worried that an abundance of abandoned farms could draw on the prosperity of the urban communities. They realized that all farmers should be offered the opportunities presented through modern science and practical agriculture and wanted a practical method to enable farmers to learn about new discoveries and how to apply them. They went to the New York State College of Agriculture and the United States Department of Agriculture (U.S.D.A.) to propose a demonstration farm be established in the area. Instead the U.S.D.A. suggested placing a trained man in each county to assist the farmers. The Land Grant System was designed to establish a state university in each state for disseminating the research information down to the county level. The first county agent was employed in 1911 in Broome County.

The plan would be doomed unless the farmers took an active role, so they organized into a Farm Bureau membership in 1913. The partnership between farmers and the college endured and there were 37 County Farm Bureaus by 1917. Steuben was the 53rd County to join them on February 1, 1918. A national federation of farm bureaus with 28 states participating was organized in 1919.

The first Steuben County agent hired was H. N. Humphrey of Livingston County, who started on March 1, 1918 in a Corning office provided by the Chamber. A Model T Ford was purchased for the agent’s use. The first assistant was C. B. Raymond of Greigsville who located in the Shannon Building in Bath. Humphrey’s office moved to Bath in 1919. Katharine Roy became the Home Bureau agent. The first annual meeting was held at the Bath Court House on December 17, 1918 with a total of 1,264 memberships reported.

The first work of the Bureau was to make a complete summary of the census for the county, to create the Steuben County Farm Bureau News, now known as the Steuben County Agricultural News, mailed to 7500 farmers, and to arrange demonstration for seed treatment. A pig club contest in 1918 involved youth in raising 17,112 pounds of pork. The agents visited potato fields to point out to the growers various diseases and methods for eliminating them. Steuben County was represented at the state fair and two local county fairs – Hornell in August and Bath in September. One of the activities in the winter of 1919 was the conducting of a tractor school. Early advertisements in the Farm Bureau News showed the coming of the tractor to Steuben farms.

The United States had entered World War I and the county agents and supporting Farm Bureau organization was enlisted to help the effort to ensure an adequate food supply for both the armed forces abroad and the population at home. Once the war was over, they began concentrating on improving farm conditions. The first project was tuberculosis eradication. In 1922 they launched the largest TB eradication campaign conducted in the United States at the time. In three weeks they tested all the cattle in the county, and re-tests a couple years later placed Steuben County as the first dairy county in the country to become accredited in eradicating the disease. This provided a favorable situation to promote the sale of cattle. Steuben became famous as a source of disease-free dairy cows and shipped them in volume throughout the eastern United States.

Recession prices following the war affected potatoes and created an interest in marketing the crop. Steuben developed the New York City Marketing Trip in 1926, the first of its kind held in the United States. It contributed a profound influence in making Steuben farmers conscious of market practices. In the winter of 1928-29 the first Steuben County Potato Growers’ Convention was launched with a slogan of “Better Potatoes and More Profit”.

The Farm Bureau sponsored the farmers’ picnic at the Bath fairgrounds every year until 1931 drawing crowds up to 10,000. In 1930 they started a soil survey, and in 1931 organized the grape festival. After the depression, the Bureau rebuilt the dairy program to establish Steuben County as first place in number of bull associations in the state and first place in number of analyzed herds in the nation. This resulted in Steuben County topping all county consignment sales in the country over a three-year period. The Soil Erosion Project in Steuben County, the first in New York State, developed from the Farm Bureau-Extension Service surveying damage on farms after the 1935 flood. The project evolved into the Steuben County Soil Conservation District.

The Steuben 4-H Department began in 1939 when Leon Taylor was named the first county club agent. Frank Finnerty succeeded him in 1943. 1939 was the beginning of “Little Maine” when county agent Bill Stempfle persuaded many potato farmers in Maine and Long Island to settle in Steuben County. It resulted in the rehabilitation of the potato industry and increased the population dramatically.

During the second World War the Farm Bureau contributed to the scrap metal campaign netting 2000 tons of precious metal for the manufacture of munitions. The Bath Livestock Market was established in 1942. Coming out of a time when truck transportation was extremely restricted, it provided a good advantage to Steuben livestock producers.

The need in New York State for Extension to be a strong educational agency and for Farm Bureau to be a strong farm organization that could speak out on controversial public issues caused the two groups to mutually separate in 1956. The County Farm and Home Bureau and
4-H Club Association name was legally changed to County Extension Service Association with three departments – agricultural, home demonstration and 4-H club.

Over the years the Bureau has been the spokesman for agriculture and has created a better understanding of farm problems among other groups of the population. County Agent Bill Stempfle understood rural people and their needs for nearly 30 years. He was prompt and energetic in relating the abilities of himself and his institution to these needs.

The original philosophy of Farm Bureau-Extension Service was to teach people to help themselves and develop local leadership. As the rural population developed increasing needs, there have been several modifications. Home Bureaus, 4-H Club work and finally the separation of the Farm Bureau from the Extension Service all resulted from the need of the farm family for more specialized education and services.

County agents and Cornell specialists have provided educational information but left the job of control and development to organizations and farm leaders. The problems of survival in our competitive economy have multiplied over the years and the need for sound organizations is even greater now. All segments of our economy benefit from a stable prosperous agriculture. We all want to live in the type of community where families have goals, values and lead meaningful lives. 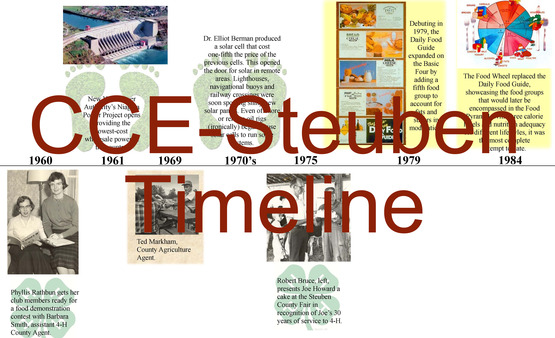 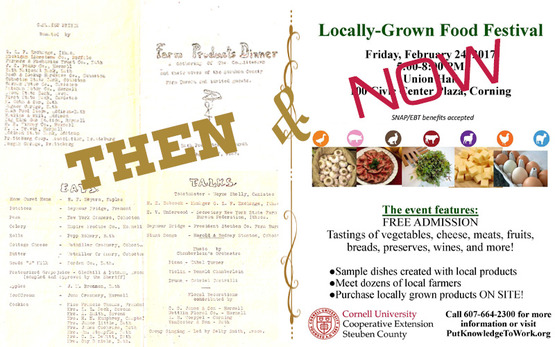 The Farm Products Dinner,  a Gathering of the Committeemen and their wives of the Steuben County Farm Bureau, February 17, 1927